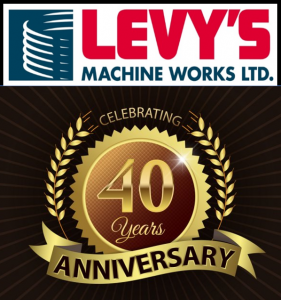 It was in August 40 years ago in 1980 that Calgary-based Levy’s Machine Works was founded by two machinists intent on making a contribution to the oil sector, which was then booming following the 1979 oil crisis driving output down and prices higher the year before.

It was only shortly after, however, that Levy’s originators found themselves having to get creative with generating income through any means of work, following the introduction of the tough and rigid national energy program (NEP) by then Canadian Prime Minister Pierre Elliott Trudeau, which slapped additional taxes on oil.

Since then and over its 40-year history Levy’s has had to withstand its fair share of ups and downs as the industry went through periodic downturn. Each time, however, the business endured and emerged from each challenge wiser and stronger. It’s fair to say that the ability to cope with adversity and make good decisions around changing situations has become one of the cornerstones of Levy’s success – the others being it’s reputation for quality, customer service and generally being able to get the job done.

Four decades on and the business finds itself navigating its way through a new and very different crisis: That of a global pandemic, not to mention its negative impact on industry and the economy in general. But, as always, Levy’s continues to push on through, remaining operational, providing the same high-end machining service and fulfilling customer needs.

If you have a requirement for precision machined parts then Levy’s Machine Works is happy to help. Please contact either 403 279 2010 or info@levysmachineworks.com.