Calgary-based machine shop Levy’s Machine Works Ltd recently had the opportunity to contribute toward the newly renovated home of Humbolt Broncos player Ryan Straschnitzki who was paralyzed from the chest down in the 2018 crash in which 16 people died.

Levy’s manufactured three Hockey Canada plates that were mounted onto sports lockers that were set up in the home in Airdrie, which Ryan has now been able to return to with his family following a series of renovations during the past year to make it accessible.

As well as being more accessible and giving Ryan more independence, the renovated home now also includes hockey memorabilia, a big-screen TV and sound system, and an elevator down to his new man cave in the basement. Ryan’s father Tom said Ryan’s smile has only been this bright once before since the accident and that was when he first got back on the ice last July to take up his new sport of sledge hockey.

After being contacted by one of the contractors involved with the renovation project, Levy’s CNC machined the plates out of raw aluminum, which were then anodized and hand-painted before being installed on the lockers. 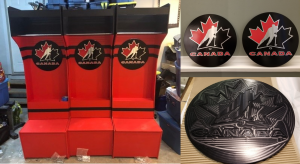